The main underpinning of poker is math – it is essential. For every decision you make, while factors such as psychology have a part to play, math is the key element.

In this lesson we’re going to give an overview of probability and how it relates to poker. This will include the probability of being dealt certain hands and how often they’re likely to win. We’ll also cover how to calculating your odds and outs, in addition to introducing you to the concept of pot odds. And finally we’ll take a look at how an understanding of the math will help you to remain emotional stable at the poker table and why you should focus on decisions, not results.

Probability is the branch of mathematics that deals with the likelihood that one outcome or another will occur. For instance, a coin flip has two possible outcomes: heads or tails. The probability that a flipped coin will land heads is 50% (one outcome out of the two); the same goes for tails.

When dealing with a deck of cards the number of possible outcomes is clearly much greater than the coin example. Each poker deck has fifty-two cards, each designated by one of four suits (clubs, diamonds, hearts and spades) and one of thirteen ranks (the numbers two through ten, Jack, Queen, King, and Ace). Therefore, the odds of getting any Ace as your first card are 1 in 13 (7.7%), while the odds of getting any spade as your first card are 1 in 4 (25%).

Unlike coins, cards are said to have “memory”: every card dealt changes the makeup of the deck. For example, if you receive an Ace as your first card, only three other Aces are left among the remaining fifty-one cards. Therefore, the odds of receiving another Ace are 3 in 51 (5.9%), much less than the odds were before you received the first Ace.

Want to see how poker math intertwines with psychology and strategy to give you a MASSIVE EDGE at the tables? Check out CORE and learn poker in the quickest and most systematic way:

In order to find the odds of getting dealt a pair of Aces, we multiply the probabilities of receiving each card:

To put this in perspective, if you’re playing poker at your local casino and are dealt 30 hands per hour, you can expect to receive pocket Aces an average of once every 7.5 hours.

The odds of receiving any of the thirteen possible pocket pairs (twos up to Aces) is:

In contrast, you can expect to receive any pocket pair once every 35 minutes on average.

Players don’t play poker in a vacuum; each player’s hand must measure up against his opponent’s, especially if a player goes all-in before the flop.

Here are some sample probabilities for most pre-flop situations:

Many beginners to poker overvalue certain starting hands, such as suited cards. As you can see, suited cards don’t make flushes very often. Likewise, pairs only make a set on the flop 12% of the time, which is why small pairs are not always profitable.

We have created a poker math and probability PDF chart (link opens in a new window) which lists a variety of probabilities and odds for many of the common events in Texas hold ’em. This chart includes the two tables above in addition to various starting hand probabilities and common pre-flop match-ups. You’ll need to have Adobe Acrobat installed to be able to view the chart, but this is freely installed on most computers by default. We recommend you print the chart and use it as a source of reference.

If you do see a flop, you will also need to know what the odds are of either you or your opponent improving a hand. In poker terminology, an “out” is any card that will improve a player’s hand after the flop.

One common occurrence is when a player holds two suited cards and two cards of the same suit appear on the flop. The player has four cards to a flush and needs one of the remaining nine cards of that suit to complete the hand. In the case of a “four-flush”, the player has nine “outs” to make his flush.

A useful shortcut to calculating the odds of completing a hand from a number of outs is the “rule of four and two”. The player counts the number of cards that will improve his hand, and then multiplies that number by four to calculate his probability of catching that card on either the turn or the river. If the player misses his draw on the turn, he multiplies his outs by two to find his probability of filling his hand on the river.

In the example of the four-flush, the player’s probability of filling the flush is approximately 36% after the flop (9 outs x 4) and 18% after the turn (9 outs x 2).

Another important concept in calculating odds and probabilities is pot odds. Pot odds are the proportion of the next bet in relation to the size of the pot.

A “bad beat” happens when a player completes a hand that started out with a very low probability of success. Experts in probability understand the idea that, just because an event is highly unlikely, the low likelihood does not make it completely impossible.

A measure of a player’s experience and maturity is how he handles bad beats. In fact, many experienced poker players subscribe to the idea that bad beats are the reason that many inferior players stay in the game. Bad poker players often mistake their good fortune for skill and continue to make the same mistakes, which the more capable players use against them.

One of the most important reasons that novice players should understand how probability functions at the poker table is so that they can make the best decisions during a hand. While fluctuations in probability (luck) will happen from hand to hand, the best poker players understand that skill, discipline and patience are the keys to success at the tables.

A big part of strong decision making is understanding how often you should be betting, raising, and applying pressure.

The good news is that there is a simple system, with powerful shortcuts & rules, that you can begin using this week. Rooted in GTO, but simplified so that you can implement it at the tables, The One Percent gives you the ultimate gameplan. 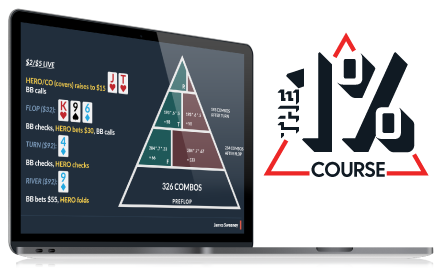 This 7+ hour course gives you applicable rules for continuation betting, barreling, raising, and easy ratios so that you ALWAYS have the right number of bluffing combos. Take the guesswork out of your strategy, and begin playing like the top-1%.

A strong knowledge of poker math and probabilities will help you adjust your strategies and tactics during the game, as well as giving you reasonable expectations of potential outcomes and the emotional stability to keep playing intelligent, aggressive poker.

Remember that the foundation upon which to build an imposing knowledge of hold’em starts and ends with the math. I’ll end this lesson by simply saying…. the math is essential.

Gerald Hanks is from Houston Texas, and has been playing poker since 2002. He has played cash games and no-limit hold’em tournaments at live venues all over the United States.